Sensor Tower has returned to the load with an interesting and intense analytical study on App Store downloads during the last quarter of 2019.

In addition, the firm has shared a series of very curious facts about the services, platforms and applications of the App Store from iOS and the store Android.

For example, did you know that the launch of Disney + was the most popular in the last quarter? Or that TikTok ended the year as the second most downloaded application, just behind WhatsApp? Well, you can discover all this data and much more below.

The last quarter of 2019 brought us some outstanding stories that perfectly summarize the preferences of iPhone and iPad users. These are the four most relevant curiosities of the end of 2019:

Globally, between the two platforms, downloads grew by 4.7% compared to the last quarter of 2018. As we mentioned previously, the figure has grown to a whopping 28.7 billion application downloads.

Internationally, between the App Store and the Google Play Store, how could it be otherwise WhatsApp was the most downloaded application during the last quarter of 2019 with a growth of 39% over the previous year and with more than 250 million downloads.

In second place we find the TikTok application, reaching a total of more than 220 million installations and a growth of 6% compared to the same period of 2018. 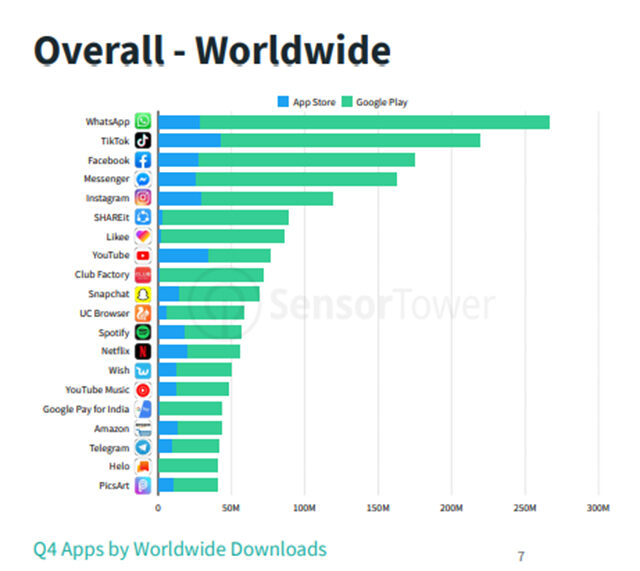 The figures in Europe (App Store) are very similar to those in the United States and of course globally. WhatsApp remains the undisputed leader, secondly we have TikTok and thirdly Instagram. Other popular apps from the App Store are Netflix, Wish, Spotify, Pinterest, Shazam, Telegram or McDonald’s.

And finally, when it comes to mobile games, the biggest winner has been Call of Duty: Mobile with Mario Kart Tour. In the list of most downloaded games we can also find Sand Balls, Brain Out, PUBG Mobile, Fun Race 3D, Ink Inc., Subway Surfers, Fortnite or Aquapark.io, among others.

These have been the most interesting data about downloading applications and games from the App Store and the Google Play Store throughout the last quarter of 2019. What were your favorite apps last year?

How to buy the new Galaxy S10 in Spain

These are the best Android games of 2016 according to Google

The POCO X2 boasts its first camera samples, and they promise a lot »ERdC

270 Hz and a power that will break all records

Rumors point to Huawei as the manufacturer of the new Nexus